Samuel Campbell Hoagland was born on December 22, 1855, in Elgin, Illinois. His parents were Zephaniah and Celia (Sears) Hoagland.

Sam married Maria Elizabeth Blow on June 25, 1879 in his hometown. According to family history notes by my grandmother, the couple was married at the residence of D.R. Jencks, Rev. D.B. Cheney officiating. However, Robert B. Mogler, another Sam Hoagland descendant, has stated their marriage certificate shows they were married a the First Baptist Church in Elgin. They had two children during their marriage, a son Frederick Judson “Fred,” was born on June 12, 1880, and a daughter, Jennie May “Jane,”born on November 14, 1881. Both children were born in Elgin.

For more than a century, through four generations and changing modes of transportation, the Hoaglands hauled freight and people around Elgin.

Zephania Hoagland’s aunt and uncle pioneered east of town in Hanover Township in 1837. Born in Steuben County, New York, Zeph also was an early arrival here, but didn’t settle down in Elgin until he had tried his luck as a’49er seeking gold in California. Zepbania became a teamster whose horse-drawn wagon carried goods around the little mill town that grew into an industrial city during his lifetime.

Zeph’s son, Sam C. Hoagland, was born in Elgin in 1855. He worked for his father and then purchased his own one-horse express wagon in 1876. The livery (a stable keeping horses and vehicles for hire) he bought four years later became one of Elgin=s largest. He also ran buses to and from the factories and supplied a big Tally-Ho wagon for picnics.

Sam Hoagland was a prudent businessman who maintained a card index on the cost of every animal and piece of equipment in his stable. His records indicated what each horse had eaten and earned. He also knew each one’s habits. When a drummer had rented a rig to go to Dundee, be complained on returning that the horse had balked. Sam charged him more than originally agreed because the rig had gone all the way to Algonquin. How did Sam know? Old Betsy never stalled except on the Algonquin bill.

Some customers desired well-dressed drivers as well as a carnage. In the Hoagland wardrooms were 15 outfits of fur coats, gloves, and caps. There were enough neatly brushed silk hats to costume a half-dozen minstrel shows.

Sam’s son, Fred J. Hoagland, was born in Elgin in 1880 and joined the business after leaving high school. When the livery closed, he adapted to the motor age and started the Hoagland Taxicab Company with three Model-T Fords and two Reos, all black. Meters were introduced in 1919, and the original fare they tallied was 25 cents for the first mile and 10 cents for each succeeding two-fifths mile. After World War I, Fred began buying Yellow cabs manufactured in Chicago by John Hertz, and the firm’s name was changed to the Elgin Yellow Cab Company.

The early Yellows had tonneaus in which only the passenger compartment was enclosed. The driver was in the open air, exposed to rain and snow. After Hertz sold out to General Motors, Hoagland switched to Chevrolets.

Two-way radios, which reduced cost and response time, were introduced in 1946. At its operating peak in the 1950s, Elgin Yellow had about 60 full and part-time employees, including three full time dispatchers, two telephone operators, maintenance shop repairmen, and drivers. The firm had 18 cars on the streets in the summer and 25 in the winter. The cars averaged about 7,000 mile per month. Eight new cars were purchased each year. By the end of the decade, Elgin Yellow had switched from Chevrolets to Checkers made in Kalamazoo, Michigan.

Fred’s son, Charles Hoagland, was born in Elgin in 1913. While still a boy, he learned the ropes by guiding new drivers around the city. He eventually became a partner in the business, withdrawing in 1964, but was driving his private livery until he reached the age of 70.

At the age of 84 years old, Sam died and was buried, alongide his wife, Maria, in Elgin’s Bluffside Cemetery. The following was transcribed by my grandmother, Helen Marie Hoagland who was his granddaughter, from a newspaper article at the time of his death. She did not state the source of the death notice: 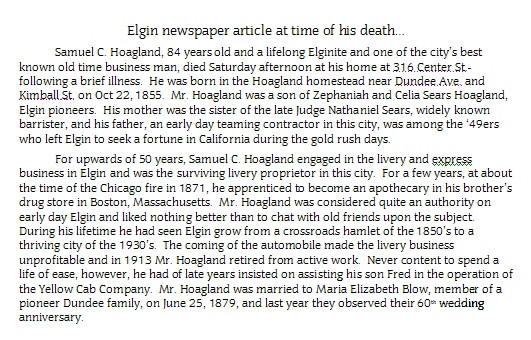 In 1888 the state of Mississippi began providing pensions to former Confederate soldiers and sailors, as well as their widows and wartime servants residing in the state.

J.R. Harkness was a member of the Freemasons

http://www.oceanspringsarchives.com/osfamilies.htm taken from several issues of the Biloxi Daily Herald 1892

Increase Graham Child fought against the British during the Revolutionary War.

Abstract of Graves of Revolutionary Patriots:

One day I was doing research in the newspaper files and found this priceless nugget of gold. A dear friend and I had grown up together and were childhood buddies in Gulfport, Mississippi. We never knew our ancestors had known each other. Cathey’s great grandfather Seth Matthews and my great grandfather, D. Edmund Morris went hunting in the Pascagoula swamps in 1913. The serendipity of genealogy research often brings surprises like this to keep us hooked on hunting ancestors. What a sweet find!

Richard Warren was a passenger on the Mayflower, arriving in Plymouth in 1620. We know he was from London and the evidence seems to indicate that he was a man of some wealth.

His wife, Elizabeth, arrived in Plymouth on the Anne in 1623 with the couples’ daughters Abigail, Anna, Elizabeth, Mary and Sarah. Two sons, Nathaniel and Joseph, were born to the Warrens in Plymouth.

Richard Warren died in 1628. His wife Elizabeth outlived him by 45 years, dying at Plymouth in 1673. Her death was noted in the Records of Plymouth Colony (PCR 8:35) : “Mistris Elizabeth Warren, an aged widdow, aged above 90 yeares, deceased on the second of October, 1673, whoe, haveing lived a godly life, came to her grave as a shocke of corn fully ripe.”

During the long period of her widowhood, Elizabeth Warren’s name appears in the records of Plymouth Colony. She appears first as executor of her husband’s estate, next paying taxes owed by a head of household, and finally as an independent agent in her own right.

Francis Cooke was born in England, around 1583.  By profession, he was a woolcomber.  He was in Leiden as early as 1603 (before the Pilgrim Separatist community emigrated to Holland) when he married Hester Mayhieu.  They were members of the Leiden Walloon Church, a congregation of French-speaking Belgian people whose beliefs were very similar to those of the English Separatists.

Francis arrived in Plymouth in 1620 on the Mayflower with his teenage son John.   Hester Mayhieu Cooke and the couple’s two other children, Jane and Jacob, arrived on the Anne in 1623.  Two more daughters, Hester and Mary, were born to Francis and Hester Cooke in Plymouth.

Alice Carpenter and her sisters (Agnes, Juliana, Mary and Priscilla) were part of the Leiden Separatist community. Alice married Edward Southworth; they had two sons, Constant and Thomas.

After Edward Southworth died, Alice Carpenter Southworth sailed to Plymouth on the Anne in 1623. Shortly after her arrival, she married Plymouth Governor William Bradford.
The marriage of William Bradford and Alice Carpenter Southworth was noted in a letter written by Emmanuel Altham to his brother Sir Edward Altham in September, 1623:
“Upon the occasion of the Governor’s marriage, since I came, Massasoit was sent for to the wedding, where came with him his wife, the queen, although he hath five wives. With him came four other kings and about six score men with their bows and arrows – where, when they came to our town, we saluted them with the shooting off of many muskets and training our men. And so all the bows and arrows was brought into the Governor’s house, and he brought the Governor three or four bucks and a turkey. And so we had very good pastime in seeing them dance, which is in such manner, with such a noise that you would wonder…
“And now to say somewhat of the great cheer we had at the Governor’s marriage. We had about twelve pasty venisons, besides others, pieces of roasted venison and other such good cheer in such quantity that I could wish you some of our share. For here we have the best grapes that ever you say – and the biggest, and divers sorts of plums and nuts which our business will not suffer us to look for.”
Sidney V. James, Jr., editor, Three Visitors to Early Plymouth
(Plymouth, Mass.: Plimoth Plantation, 1963), p. 29-30.
Constant and Thomas Southworth came to Plymouth sometime after 1627, they probably lived with their mother and stepfather. Alice and William Bradford had three children: William, Mercy and Joseph. William Bradford died in 1657, Alice died in 1670. Her death was noted in the Records of Plymouth Colony:
“On the 26th day of March, 1670, Mistris Allice Bradford, Seni’r, changed this life for the better, haueing attained to fourscore years of age, or therabouts. Shee was a godly matron, and much loued while shee liued, and lamented, tho aged, when shee died, and was honorabley enterred on the 29th day of the month aforsaid, att New Plymouth.”

Before her death, Alice Carpenter Southworth Bradford wrote a will.
Click here for that will as well as for the inventory of her estate at the time of her death.

“History remembers only the celebrated, genealogy remembers them all.” ― Laurence Overmire 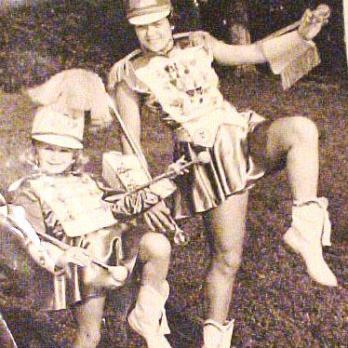 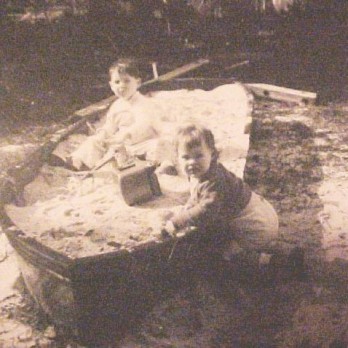 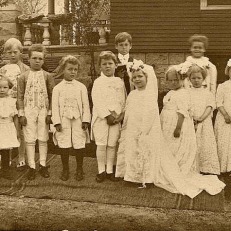 Helen Marie Hoagland, second child on the left side of this photo, was my biological paternal grandmother. She took part in this “Tom Thumb Wedding” in Elgin, Kane County, Illinois. 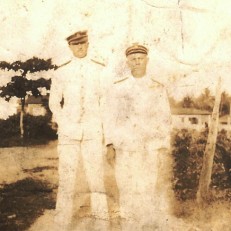 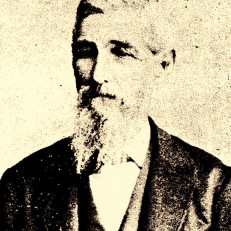 Capt. John Rankin Harkness 1830–1903 / Biloxi Pioneer / Architect and builder of many homes, the school and businesses in Biloxi. Harkness was street commissioner on the Biloxi City Council and was a member of the school board as evidenced in The Biloxi Herald newspaper at the time. 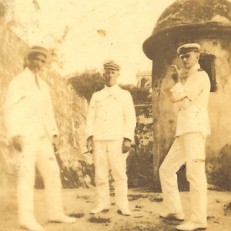 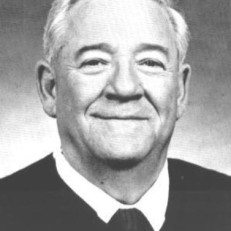 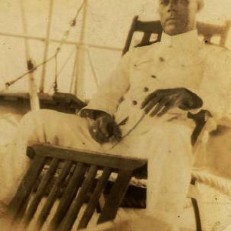 David Edmund Morris 1920’s Puerto Rico Photo of D.E. Morris on a ship while he was a Chief Engineer of the USS Ranger 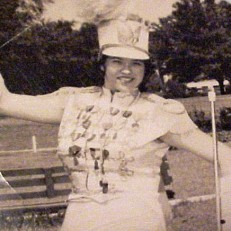 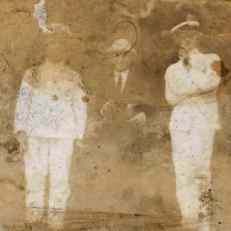 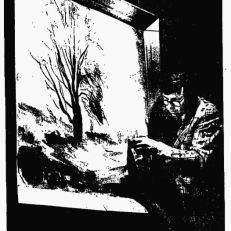 The Daily Herald-Chicago Illinois 1974 January 27 John Mosiman: his painting comes from the heart 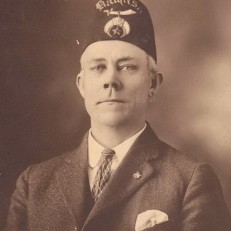 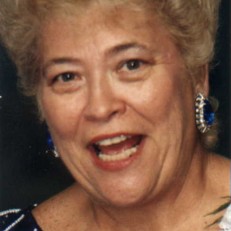 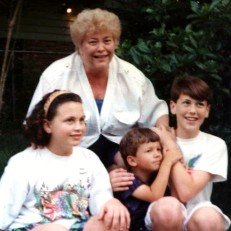 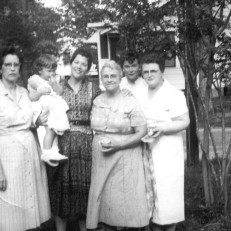 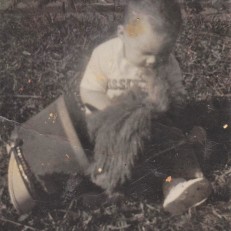 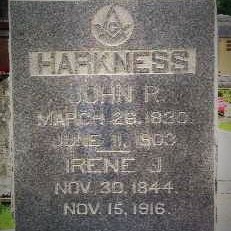 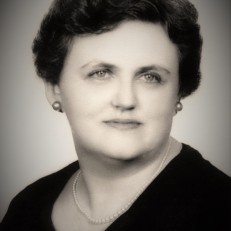 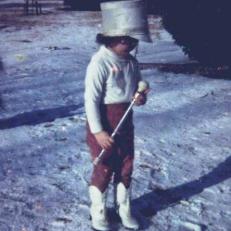 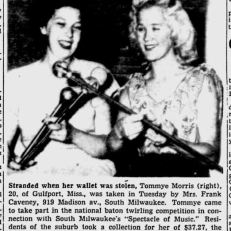 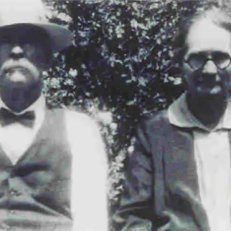 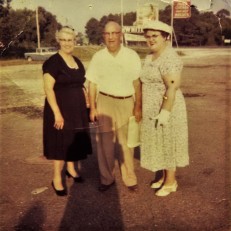 Rosie S. Morris with Millard Ayers “Boots” and Helen Hoagland Mason. Mississippi Gulf Coast Out for supper at the “White House” Restaurant. It used to be a favorite place to dine for many Gulf Coast residents. I believe that shadow photographer may be my mother’s shadow and I would have been four years old at the time of this photo so was that me beside her?

© “The Tenderly Rose Collection” and “The Diary of Miss Hattie Alexander”, 2016. Unauthorized use and/or duplication of this material without express and written permission from this site’s author and/or owner is strictly prohibited. Excerpts and links may be used, provided that full and clear credit is given to “The Tenderly Rose Collection” and/or “The Diary of Hattie Alexander” with appropriate and specific direction to the original content.

This work is licensed under a Creative Commons Attribution 4.0 International License.

The Tenderly Rose Collection
Create a free website or blog at WordPress.com.